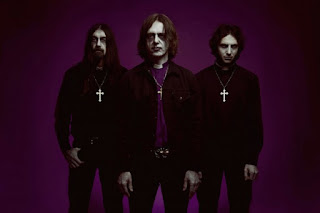 With the dead (2014): Were formed in the U.K by the founding rythm section of occultist doom band Electric Wizard guitarist/bassist Tim Bagshaw (also a current member of Serpentine Path) and drummer Mark Greening, a pair once notorious for the sheer brute heaviness of their bowel-shaking sound and early extra-curricular activities that involved excess, injury and low-level criminality (arrests for the theft of a crucifix from a church roof and drunkenly robbing an off-licence to name but two). Both have also played together in Ramesses. Completing the triangle is frontman Lee Dorrian, co-founder of Doom pioneers Cathedral, former frontman with grindcore legends Napalm Death and owner of Rise Above Records, the UK’s finest independent purveyors of all sounds heavy and underground.

WTD released last month their debut release, putting on history a direct and devastating sound. The monsterriffs on it, Greening's drum style, Dorrian's old school vocal performance, the whole concept and lyrics made the record just perfect and one of the Best 2015 Doom Metal releases.

The single "Living With The Dead" and their first official video "Crown Of Burning Stars" were the perfect teaser to keep us waiting this monster record. Other tracks like "The Cross" or "I Am Your Virus" will make you feel that your life is so decrepit, decadent and "Screams From My Own Grave" (I think is my favorite... Fuck it's so DOOM). This is an old school, short, direct and crushing album I highly recommend...

With The Dead - Crown Of Burning Stars (Official Video)